Well I now have one quilt show under my belt. I signed up (for the first time) to be a vendor at our local guild’s quilt show. This show happens the first weekend of May each year. It is a pretty good size show with maybe 250 quilts to look at and about 1100 visitors coming through over the course of the show. I was a bit nervous as I had absolutely no idea what to expect.  Overall, I would classify my experience as a huge success!

We set up my 10′ x 10′ booth on Friday afternoon.  My sister, Patti, came up for the weekend to help me. It was such a  treat to work with her and just be able to hang out with her over the long weekend. She came up Thursday morning and we spent the afternoon doing a bit of a dry run in my garage. We laid out the tables, hung the banner, and selected a few smaller props that I had gathered to see what we could fit. On Thursday night, with the help of my wonderful husband (a packing genius who can fit so very much into small, tight spaces), we got everything packed up in our two cars. Ray has a truck which would have fit everything but I really don’t like driving it so we decided to use our two smaller cars. 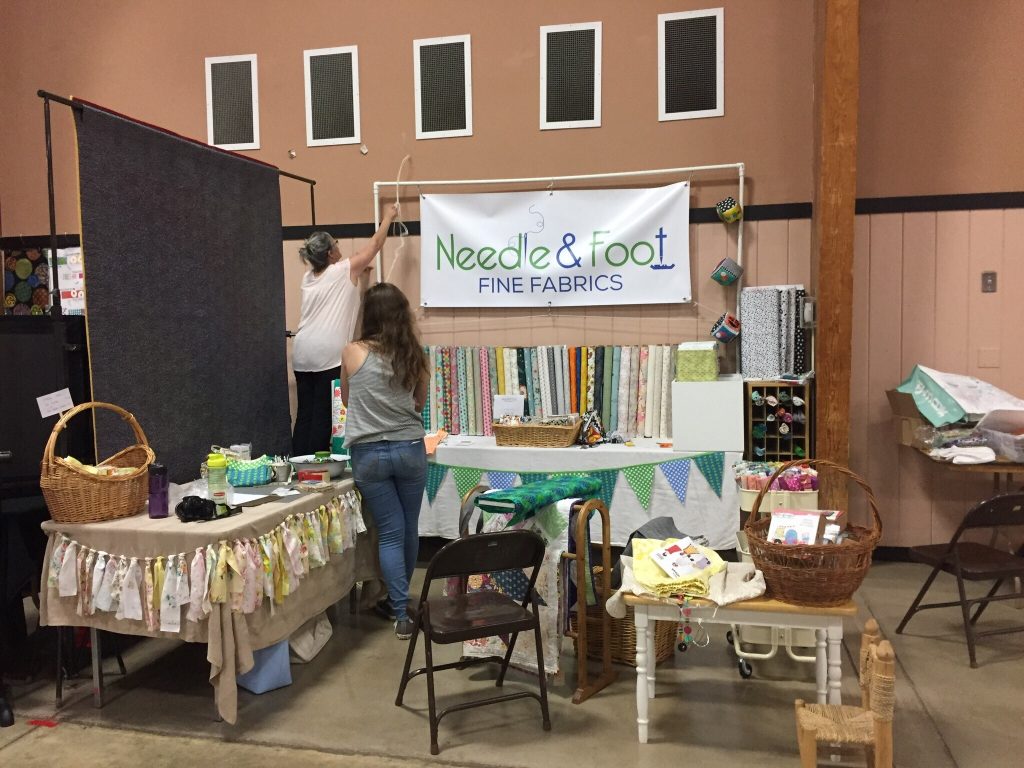 Friday morning found us wrapping up a few details and drinking way too much coffee before heading out to pick up Julia from school.  As luck would have it, she had an early dismissal. Having the three of us to unload cars and set up the booth was great. If I had done it myself it would have been a lot more work. Strength in numbers, right? 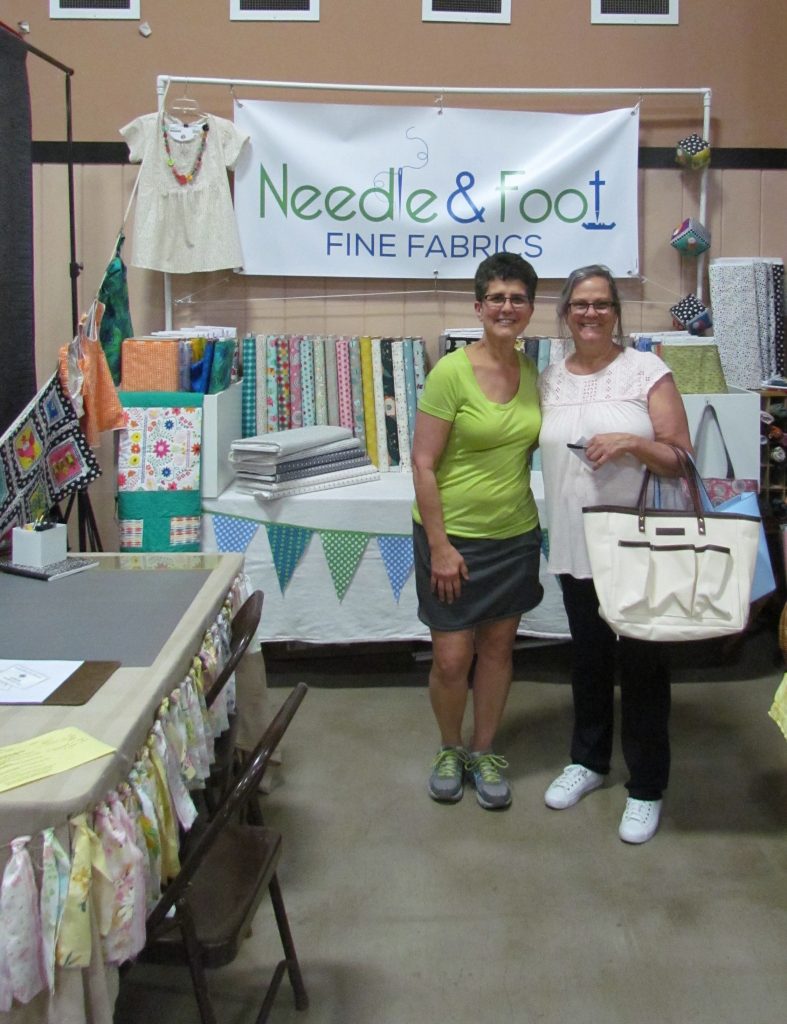 Thanks for all of the help Patti!!

The show ran from 10 am to 4pm on Saturday and Sunday. It took a harrowing 45 minutes for the first sale to occur. I was sure we should just pack up and go home (maybe I was being  a bit overly anxious?) 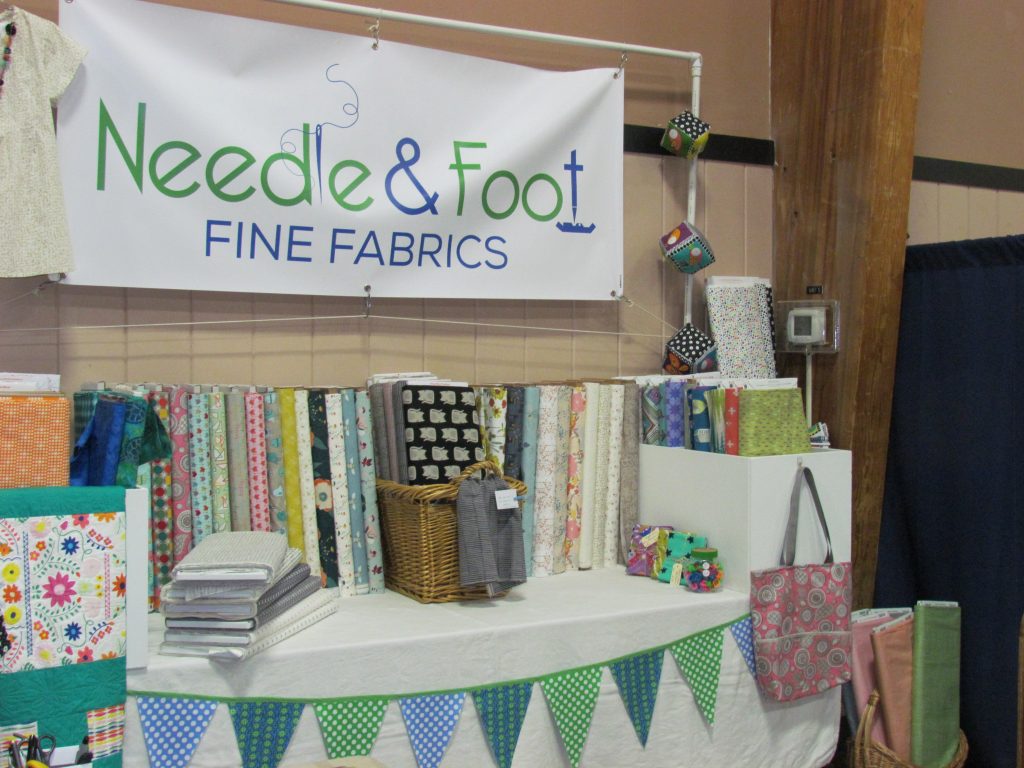 Oh no! Where is everybody??

Once that sale happened, it all just started to flow. We had steady customers up through the last hour. Hurray!!  By the end of Saturday afternoon we were ready to go home and have a glass of wine. We reviewed the day and thought of a few things to change for Sunday. 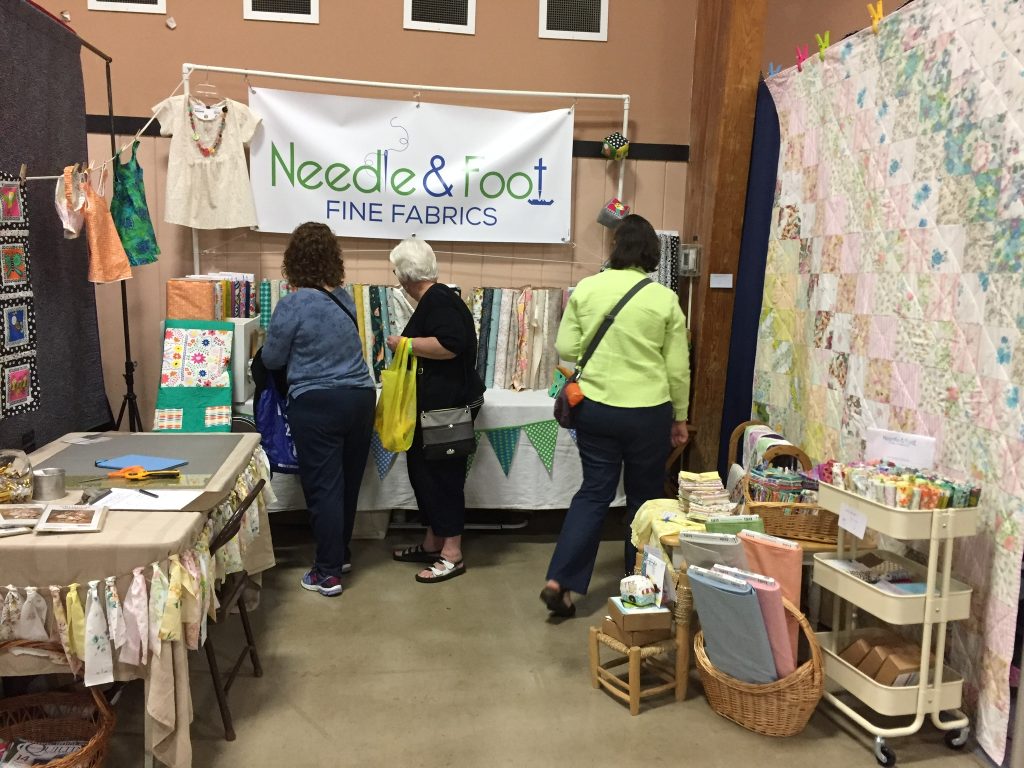 One thing I noted was we were selling so much yardage and very few precuts. The precuts were too low, out of the line of vision for our customers. Additionally, the FQ’s and FQ bundles were packed too tightly so it wasn’t enjoyable to look through them. 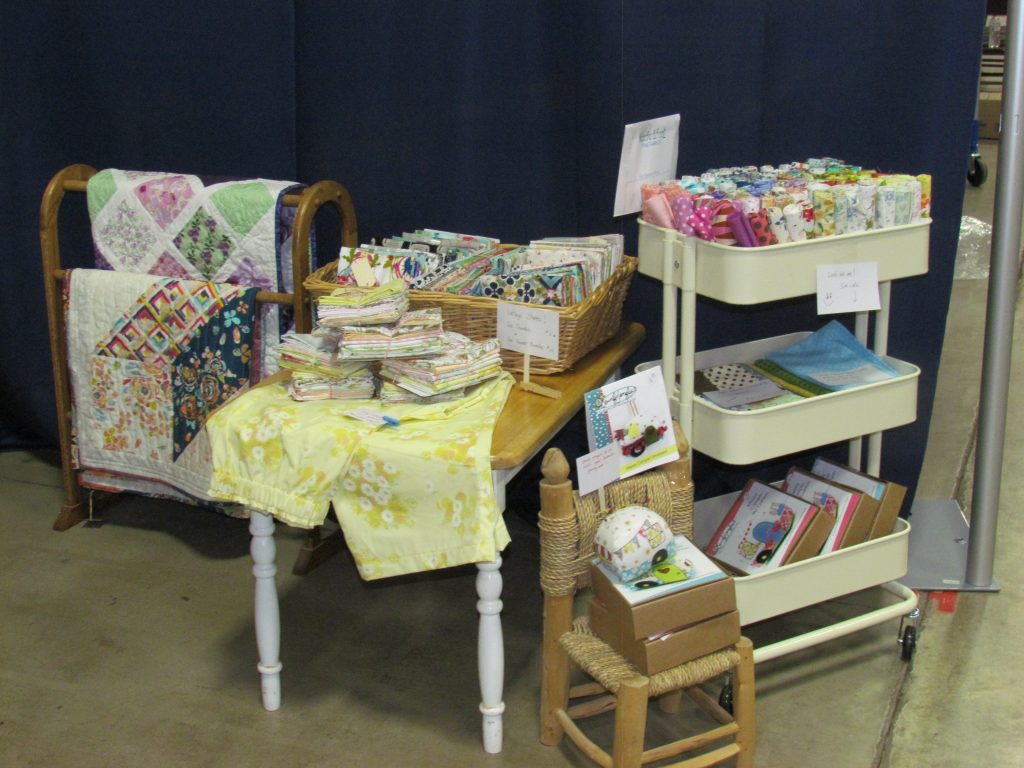 On Sunday morning we moved a few things around. I took the FQ bundles and stacked them on top of the bolts I had cut them from. This way if a shopper was admiring a bolt of something or other, the bundle was right there. It worked out wonderfully and Sunday we sold both yardage and a lot of FQ bundles. I also moved a few of the collections around to see if I would get better attention to some of the bolts that we had not seen any action on Saturday. This was also successful.

While at the show I was pleasantly surprised by how friendly the vendors were with each other. They encouraged me and answered any questions I had once they knew I was a newbie at this. I shouldn’t have been surprised since we are all part of this quilting community, which we all know to be incredibly kind. I had thought since we were (in some ways) competing with each other, it might not be this way. 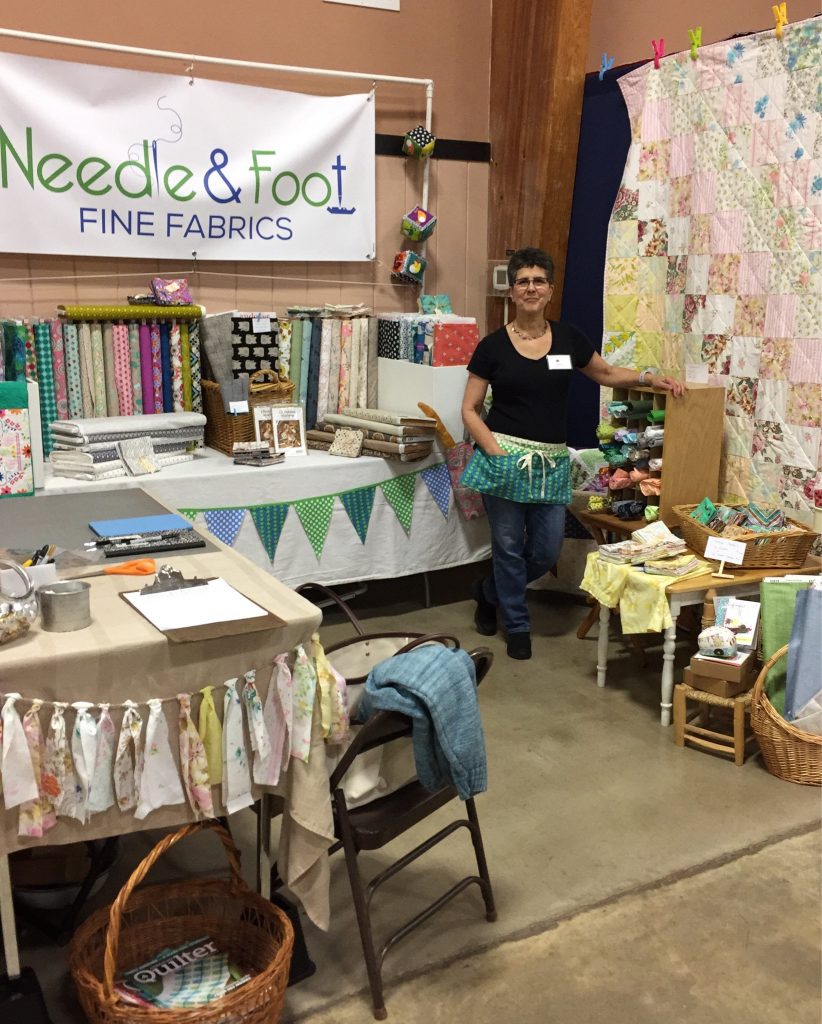 Also, three different quilt guilds invited me to have a booth at their shows! It had been my hope that I would make some connections and it certainly happened. I have a show scheduled for September, another for November, and the third is next year. This means I have some time to work out any kinks from this show, making the next experience smoother.

As far as selling fabric, I was pleased to see how receptive my customers were to the lines I am carrying. I had a great deal of positive feedback. There were no other vendors carrying Andover or Art Gallery fabric. I live in a traditional area and normally one sees lots of repro and novelty fabric at this show. There was also a booth featuring brightly colored Timeless Treasure paired up with black and white bolts. The most popular fabric in my booth was the Maker Maker linen/cotton blend line and the Gossamer line by Sharon Holland. I completely sold out of a few bolts which was delightful. Also, the newest line I have, Dreamer, by Carrie Bloomston (Andover fabric) was very popular.

I had fun posting progress pictures on Instagram. All of you were so encouraging to me along the way. Now I have a significant amount of tidying up to do in my shop as this week gets back to normal.

I will be posting an update soon on the Sew Along that will commence at the end of June. I want some feedback on the pattern choice.  Also, at the very end of May, I will have the fourth installment of my Meet the Designer series for you (and there might just be a giveaway involved in this one!) Enough for now, I have lots of boring housework to do after ignoring it all of last week. I keep telling myself if I get the chores done today, I can sew tomorrow. That seems fair, doesn’t it?