I am popping in to say hello!  It is a really busy time around here.  Julia is quite independent as far as taking care of Olive but I enjoy participating a bit with the fair process.  Over the weekend Julia and Ray had to get the pen ready at the fairgrounds.  Julia is showing “independent” this year which means she isn’t a part of a 4-H group or an FFA program.  The academically rigorous high school she goes to makes it really difficult to participate in those other programs. Since she worked with 4-H last year, we talked to her leader and she was positive Julia could handle this as an independent. 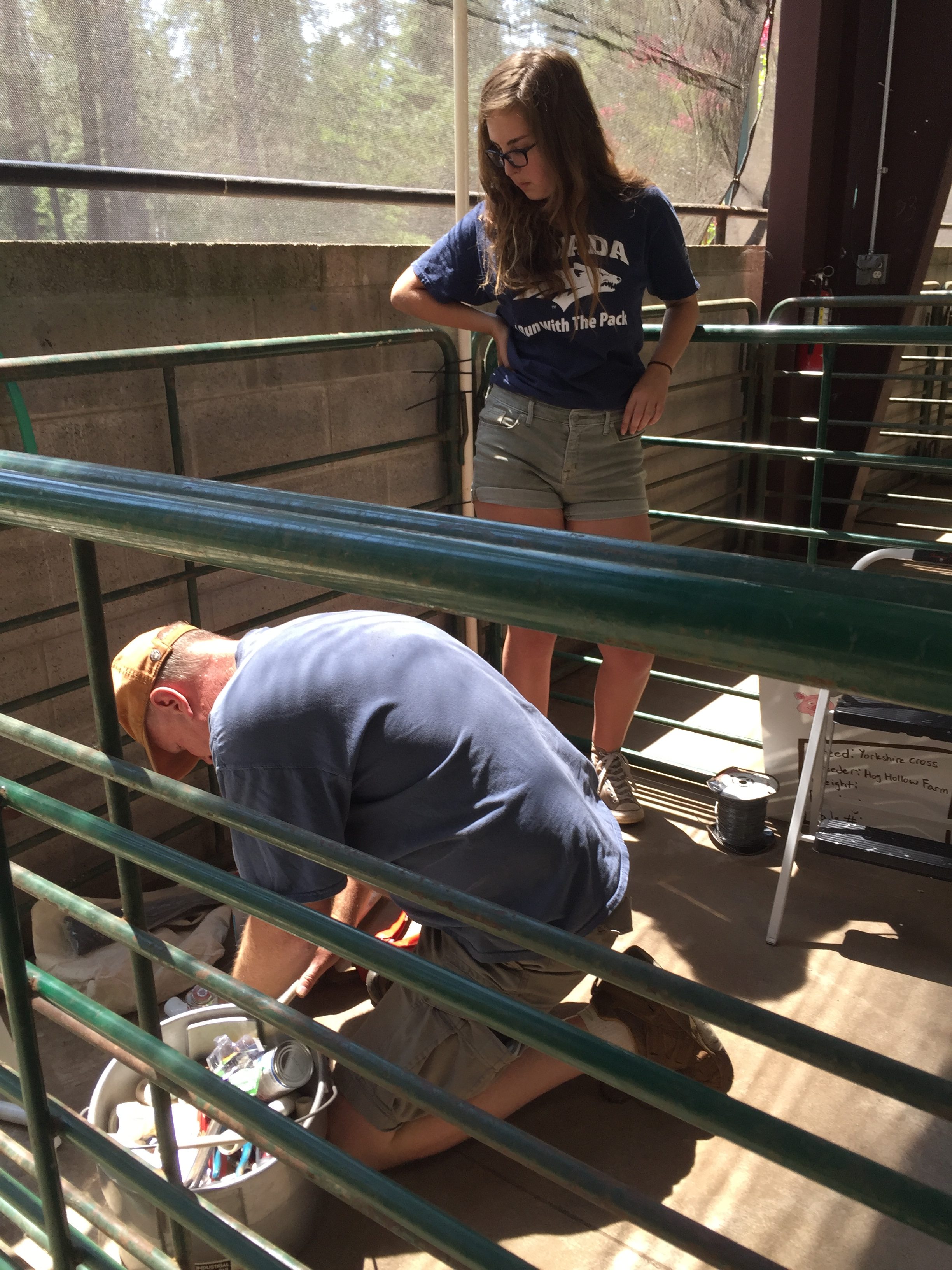 However this means it was up to her and Ray to get water piped into Olive’s pen. 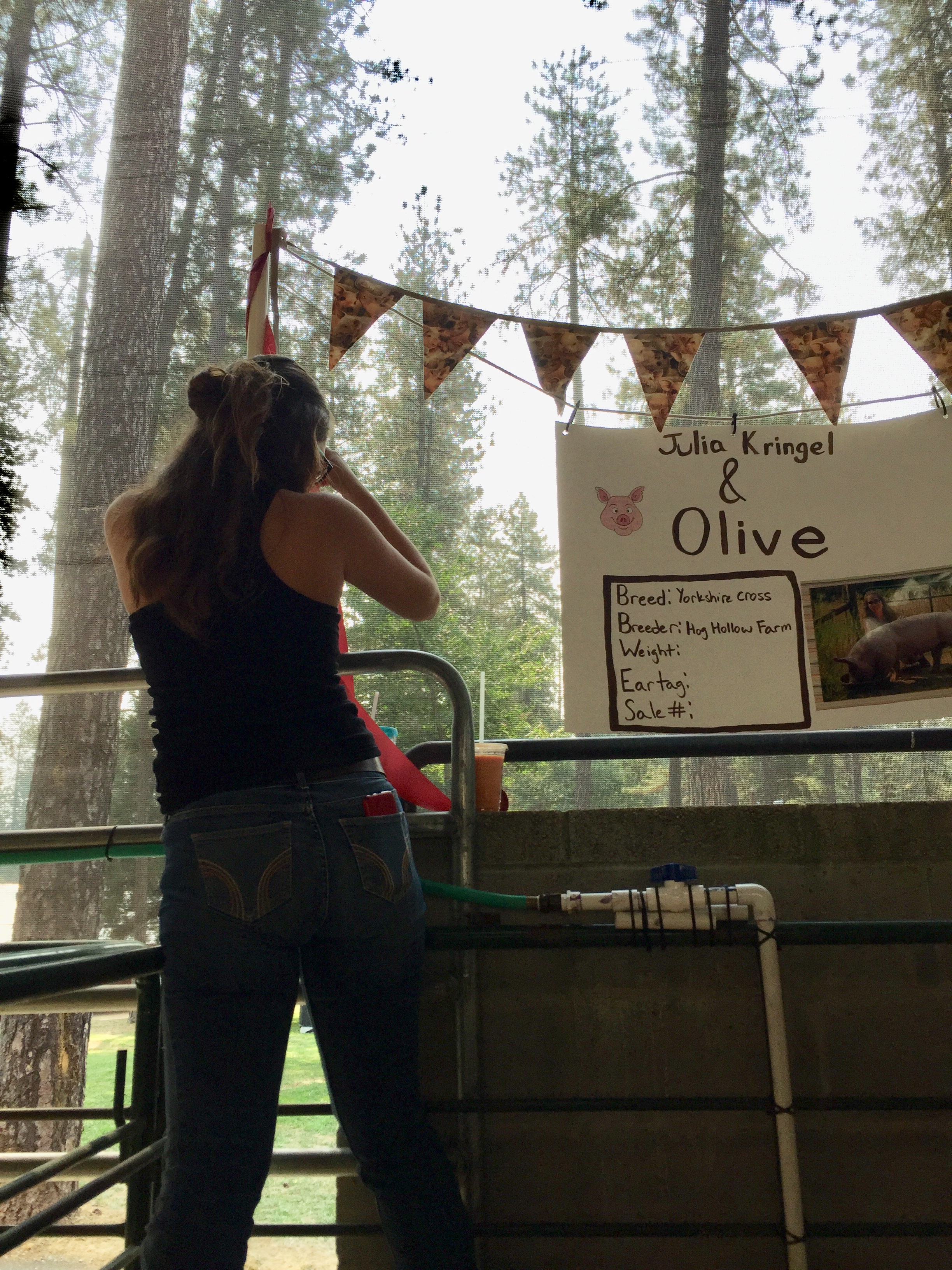 Also, she had to make her own decorations.  For this, she made a poster with a cute 8×10 picture of her and Olive. I made a bunting using pig fabric that Julia found on-line.  The pen looks cute. 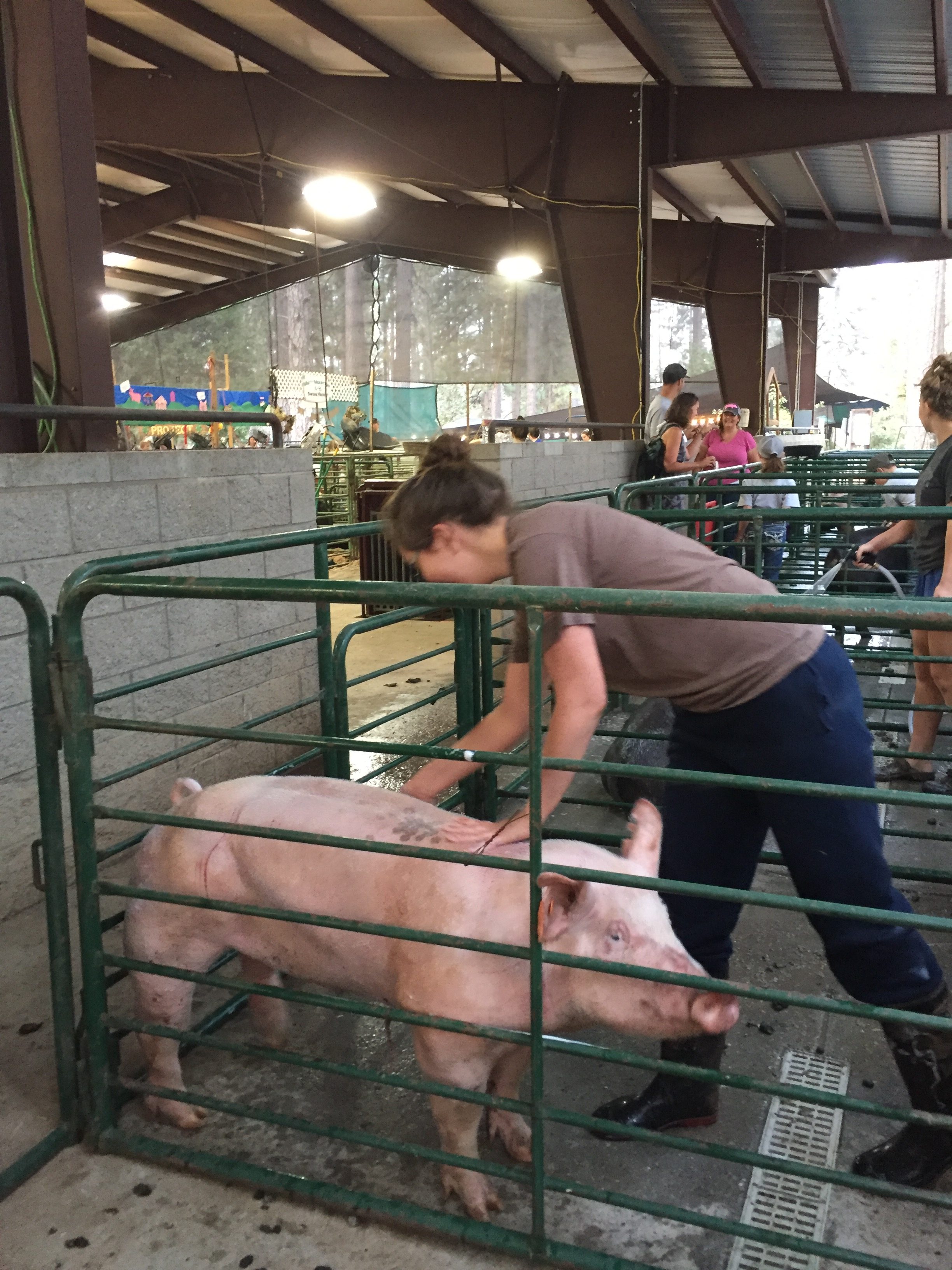 Olive moved in on Monday morning.  She didn’t enjoy the eight mile ride to the fairgrounds and ended up cutting her snout on something in the trailer.  Poor girl.  Julia washed the cut and put betadine on it.  She was told to use Desitin ointment to help it heal and it looks much better even two days later. 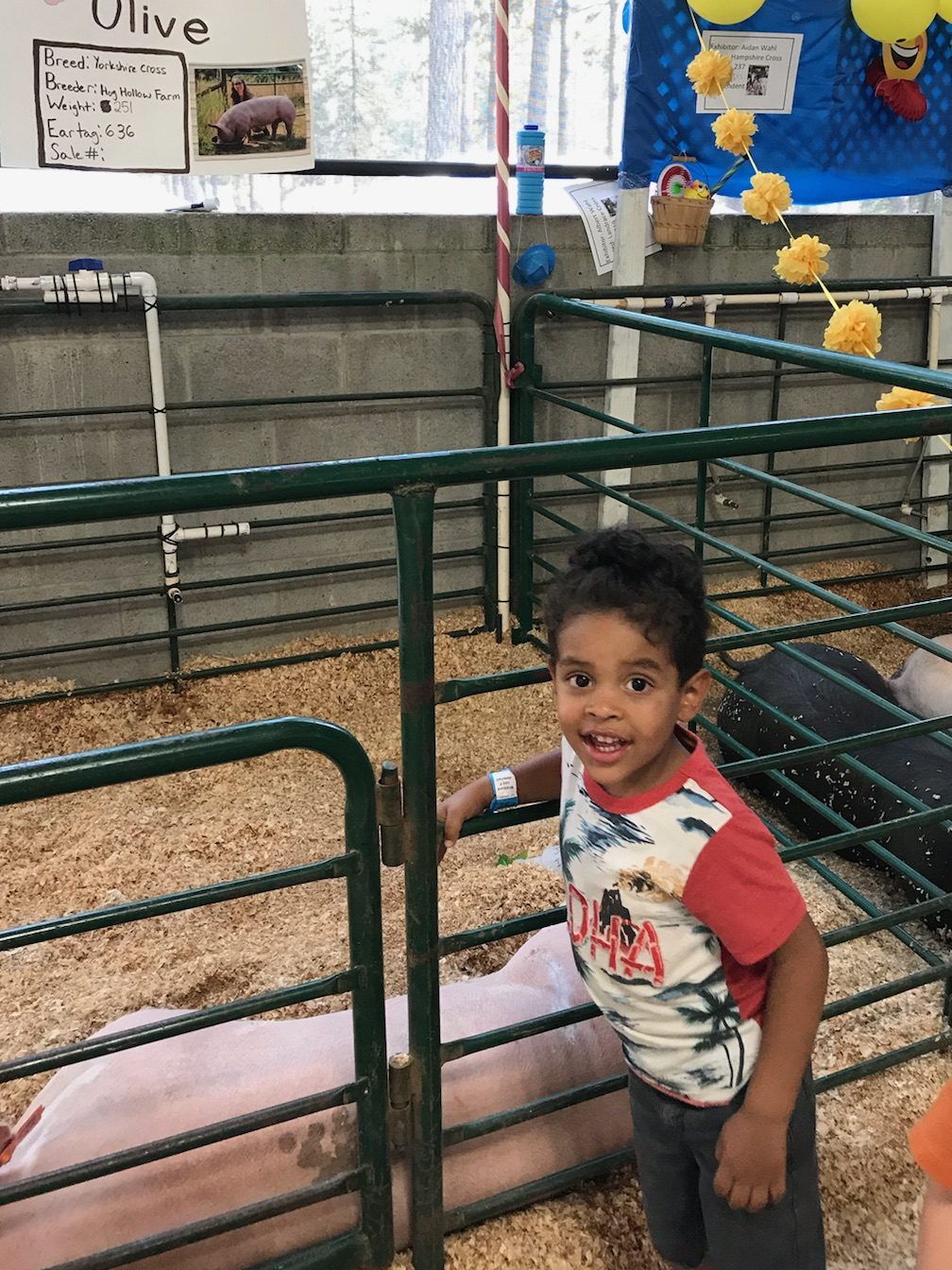 Today was the first day of the county fair. I think this picture of this cute little guy visiting with Olive is just adorable.  So many kiddos don’t have an opportunity to see farm animals up close and personal.  Julia was hanging out with Olive for several hours this afternoon answering questions and helping children pet her.  Fortunately Olive is so social and she loves to be handled. Makes it more fun for the kids that want to touch her.

Tomorrow is a big day for Julia.  She will compete in two areas with Olive.  One is called Market Class.  This competition judges the animal’s structure and development.   Doing well  here means the animal’s owner chose well when buying the piglet and was feeding her correctly and exercising her to achieve good muscle structure.  The second competition is Showmanship.  Here is where all of those walks that Julia did with Olive will pay off.  Olive is fairly good about responding to Julia.  It is anyone’s guess though because Olive and Julia have been working together in a familiar environment without the chaos of lots of pigs being in one show ring.  Hopefully Olive will respond to Julia.  Sometimes a pig will just go bonkers and run around trying to play with the other animals.  Other times a pig will become agitated and can be snarly with other animals out of fear.  Olive won’t do this – she is so sociable.  However, running around and trying to play?  Yep, that one could happen.  🙂

On another subject, our vegetable garden is just going crazy and we are inundated with tomatoes and cucumbers.  Tonight for dinner I am making spaghetti.  I wanted to make a meat sauce with the billion tomatoes sitting on my kitchen counter.  To do this, I processed the smaller tomatoes (including quite a few cherry tomatoes) in the food processor. I also wanted some big chunky pieces of tomato in the sauce. But that would mean peeling some tomatoes or I would end up with big pieces of tomato skin floating in the sauce. 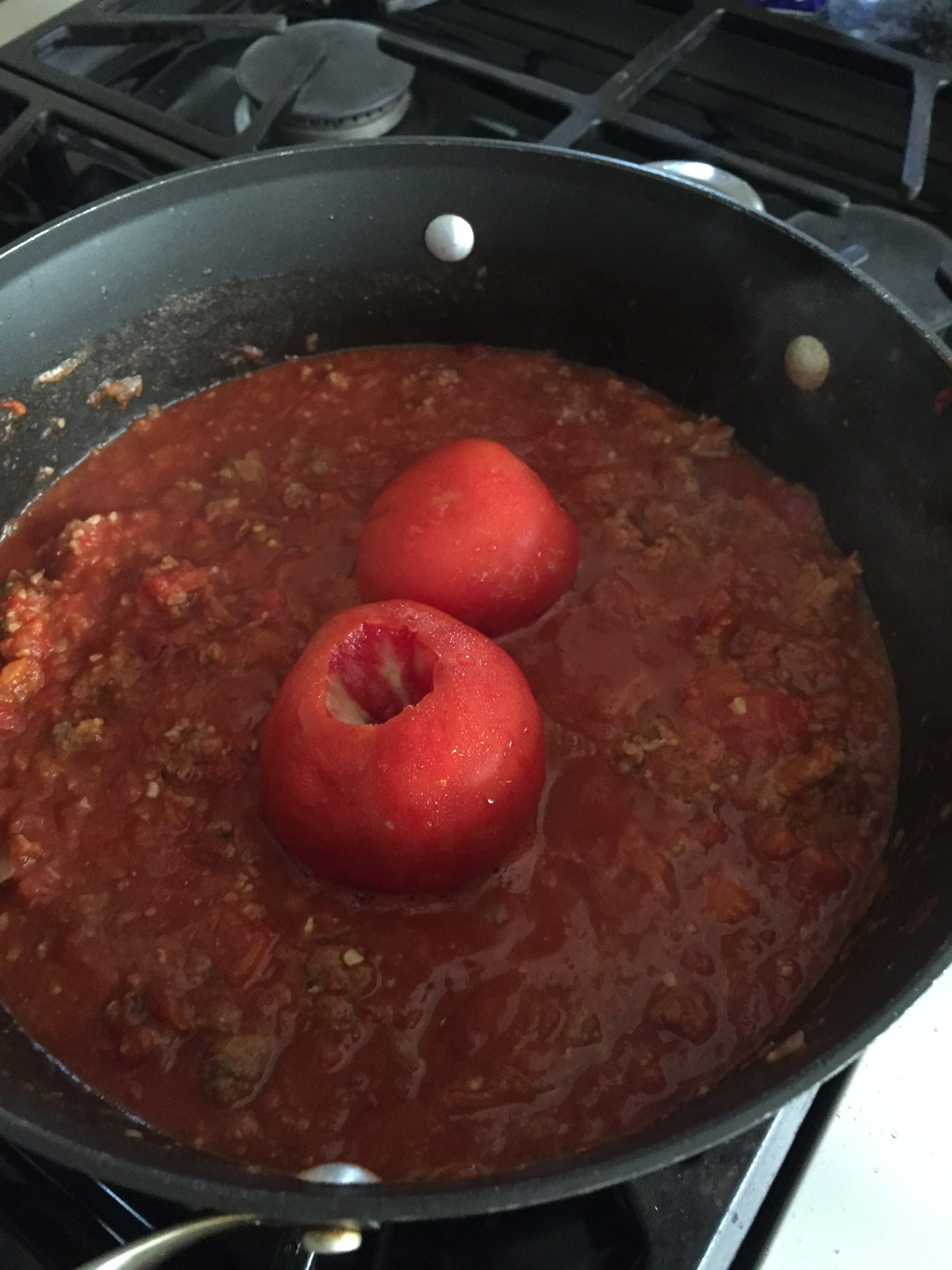 I didn’t feel like doing the whole deal where you dip tomatoes in boiling water and then ice water so the skins slip off.  Instead I cheated and it worked great!! Once I had the sauce mostly there, I put several washed, whole tomatoes right on top of the sauce and covered the pot.  I left the tomatoes to steam for a few minutes.  Using tongs, I took the tomatoes out and put them on a plate to cool a bit.  The skins slipped right off!  Hurray. 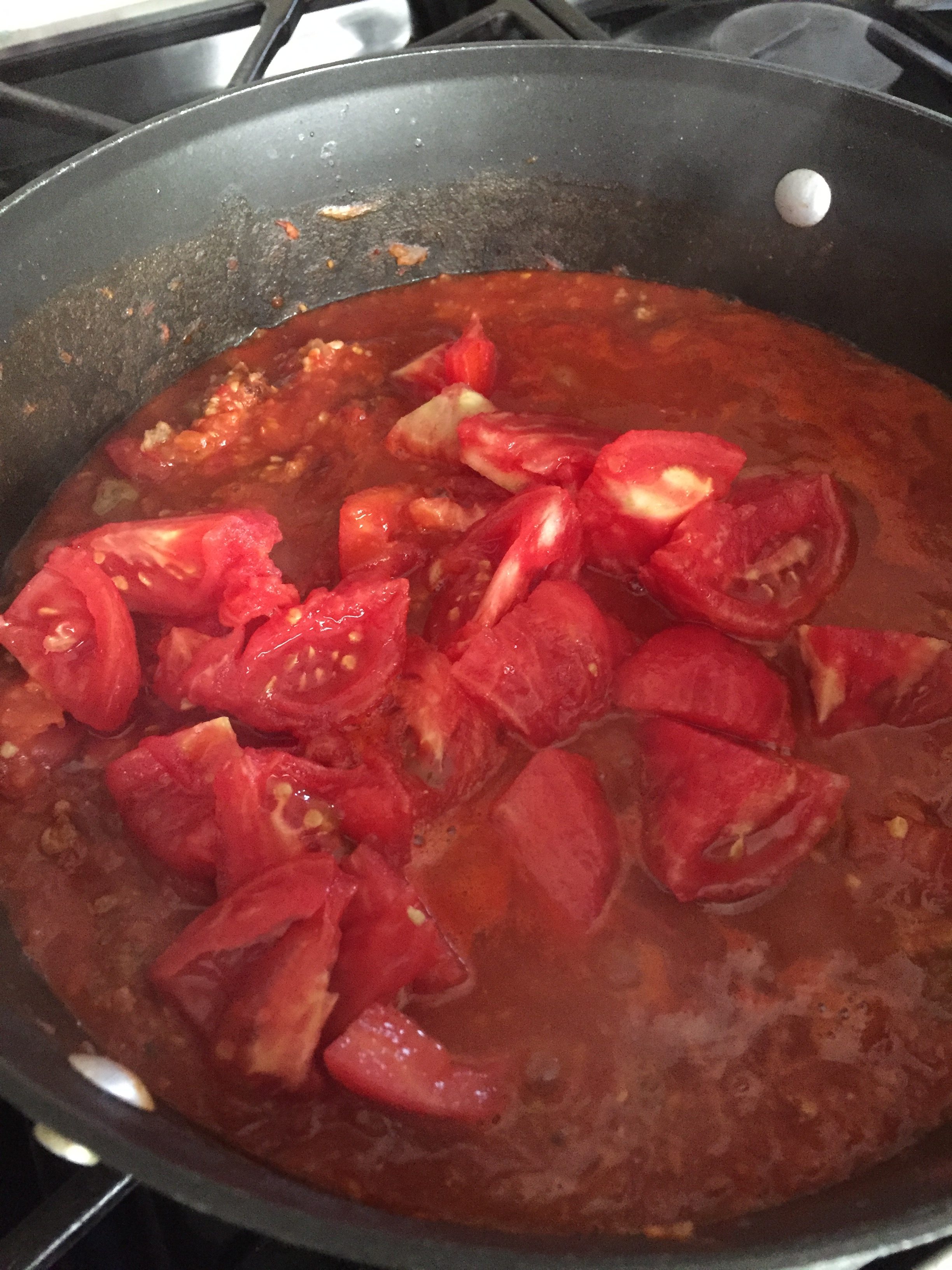 I cut them into chunks and put them in the sauce.  It smells so yummy in the kitchen right now.  Dinner is almost ready!

I am working on a cute dress for my grand daughter this week.  I will share it soon as I can.  Tomorrow I will be at the fair with Julia all day and then I am working a shift in the quilt exhibit.  I’ll let you know how Olive does.  Cross your fingers for Julia!!