One of my favorite projects from this year has to be the quilt I made with the Sewcial Bee Sampler Quilt Along.  Remember this?  Hosted by Sharon Holland and Maureen Cracknell, there was one block released each Wednesday for twenty five weeks. There were several reasons for this being my favorite. One was the block design. The blocks were based on common piecing methods but Sharon and Maureen gave them a really modern look, probably because they included solids in their fabric selections. It gave the blocks such a fresh look.  Also, the blocks were doable.  I have been quilting for a while but I am definitely still in the advanced beginner stage and fussy, intricate blocks tend to frustrate me.  Finally, the community developed by Sharon and Maureen.  This was actually the main draw for me.  So many quilters joined in – I would have to say there are hundreds of SBS quilts either finished or in progress.

The use of social media greatly enhanced the development of a friendly group participating in this QAL.  Also, Sharon and Maureen were really dedicated to staying involved in the conversations on Instagram and put out a strong, positive vibe by giving great feedback and praise as we all shared the blocks we were working on.  While this is not my first QAL, it is the first time I really paid attention to the quilts others were making as I made mine.  With previous projects, I wasn’t as involved with the other quilters so I didn’t see as many projects made from the same quilt pattern.

The Sewcial Bee Sampler quilts that were made are gorgeous. I have had such a fun time perusing the #sewcialbeesampler hashtag and looking at the color schemes, fabric choices, and the ways quilters chose to set or arrange their blocks. I thought it might be fun to share some with you today.  When you look at the quilts one after the other, it is so cool to see the varied interpretations of the patterns Sharon and Maureen developed. 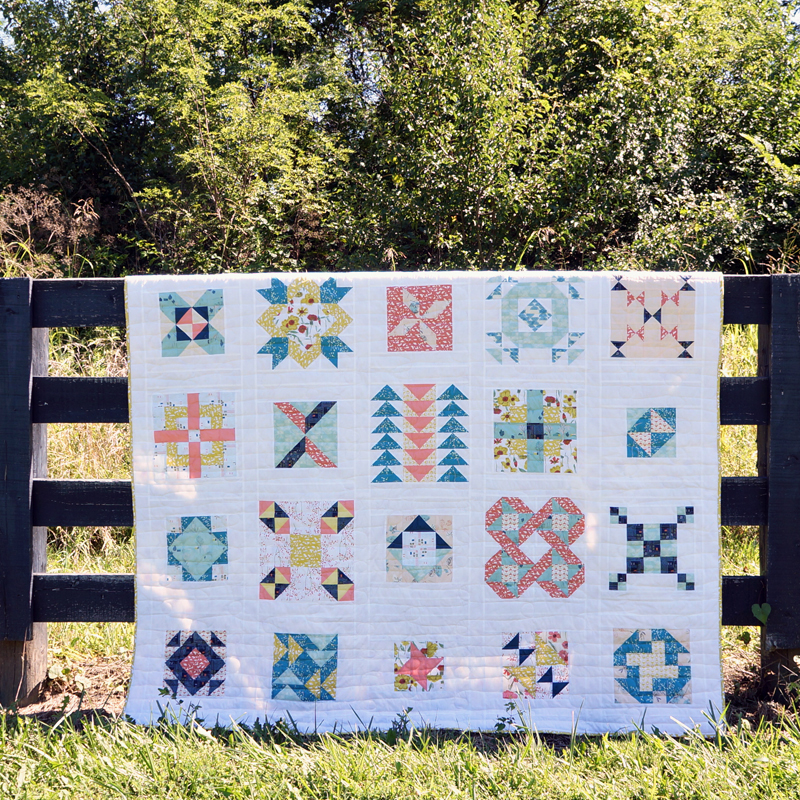 Let’s start with the queens of the quilt along, Sharon and Maureen!  Believe it or not, Sharon made two quilts (I had enough trouble keeping up with just one!) The quilt above was made with the same fabric for the block borders and sashing which gives a cohesive look to the quilt.  It makes the blocks float on the surface. 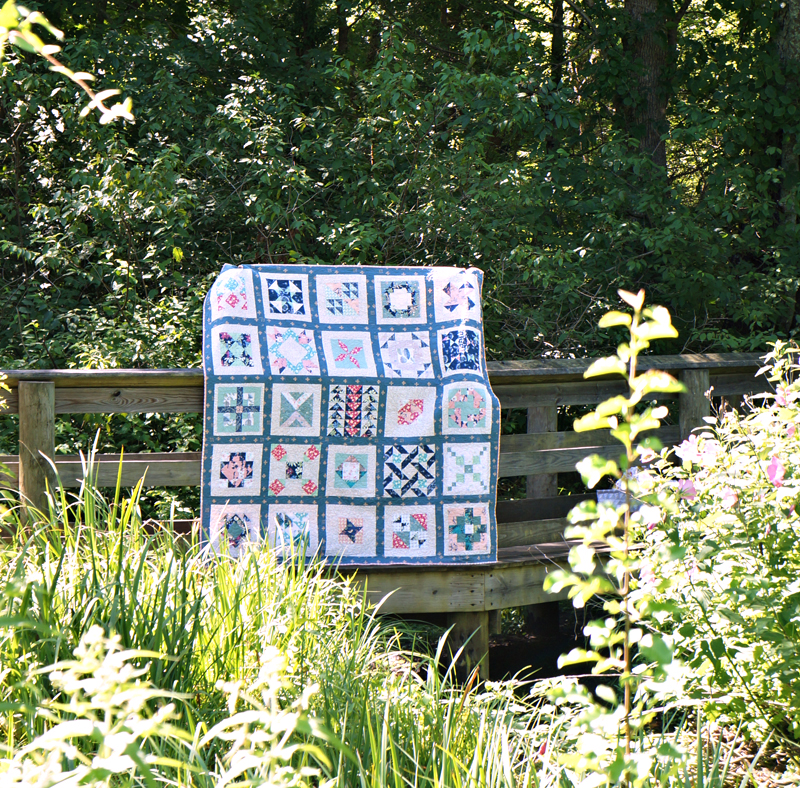 In the second version of the SBS quilt, Sharon used uniform frames for the blocks and chose to set them with a blue sashing.  Notice how distinctly the blocks stand out when sashed like this.  She used a palette focusing on blues, pinks and white which is really sharp. 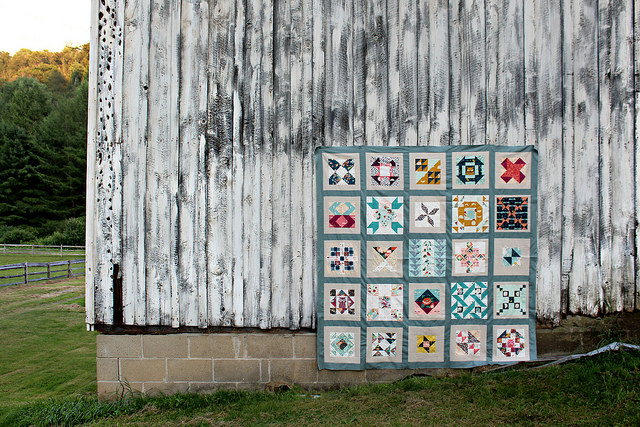 This quilt is Maureen’s project. It looks like she sashed hers with a denim color chambray fabric. I like that she has some really vivid pops of color – the three bursts of yellow that stand out to me. 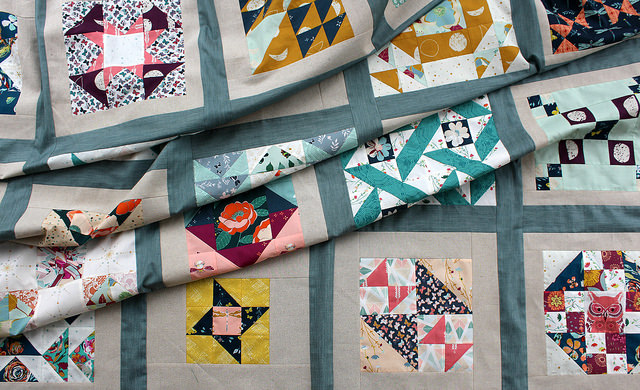 Also, because Maureen often designs fabrics with a large focal point, she was able to use those and do some great fussy cutting for block centers. Look at the shot above and you’ll see an owl, dragonfly and her gorgeous orange peony. 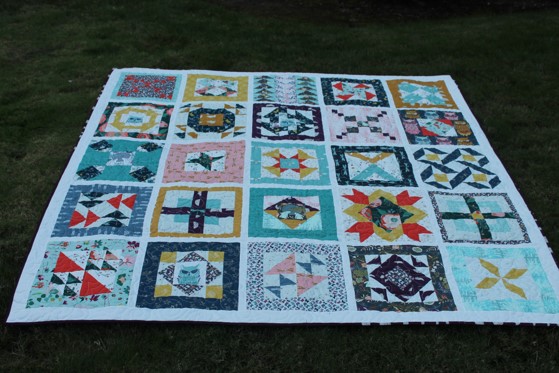 Cynthia of Quilting is More Fun than Housework, also used Maureen’s Garden Dreamer fabric for her quilt.  You will find the owl and the peony in her quilt as well.  Same fabrics building many of the blocks, yet it looks different.  Maybe partially due to the white sashing and varied fabrics used to frame the blocks? 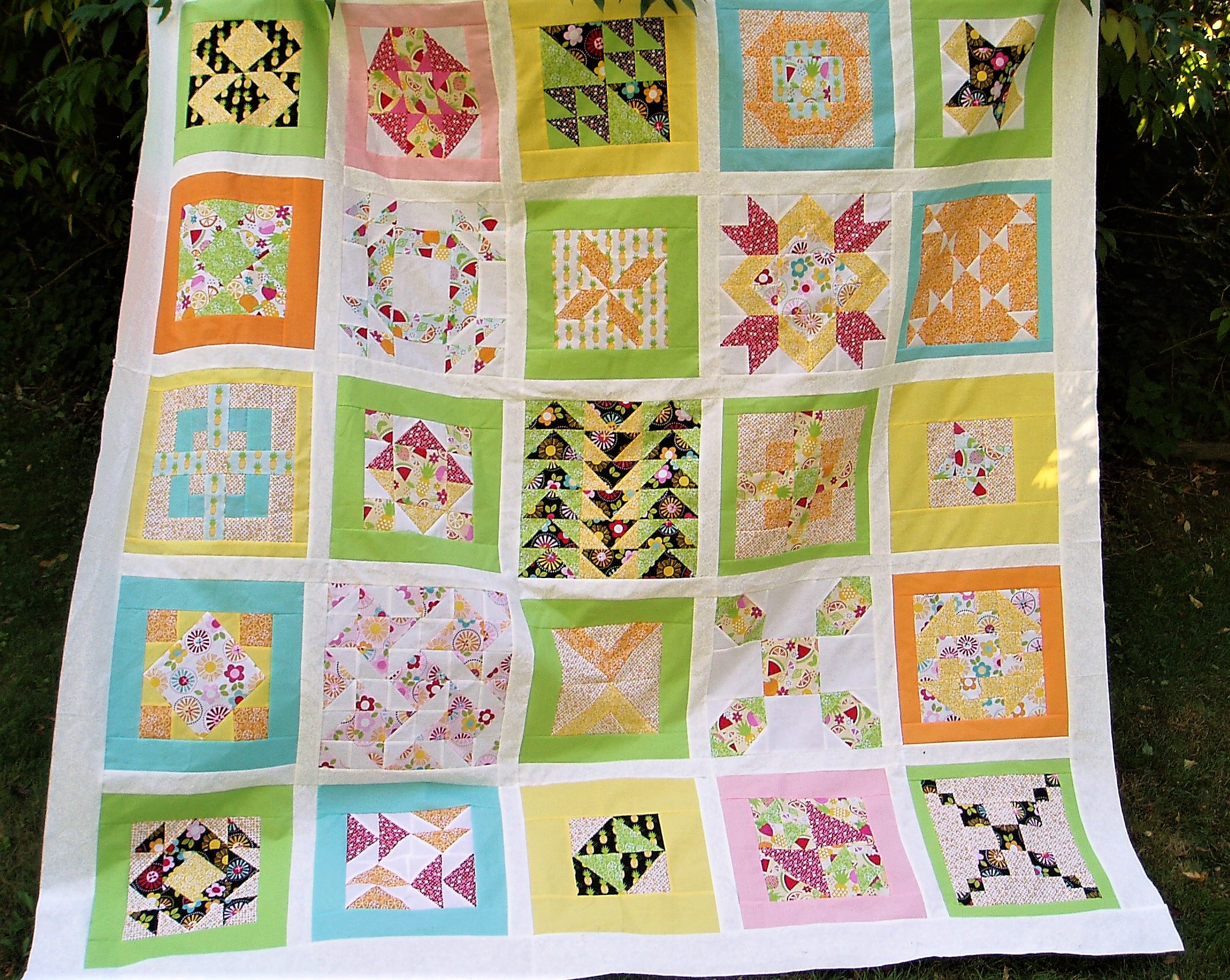 My friend Mari of Academic Quilter also made a quilt.  She chose bright, colorful fabrics which gave her quilt a definite summery vibe.  It makes a person happy just to look at it and I think it is the colorful palette she used. She also framed her blocks in a variety of colors. 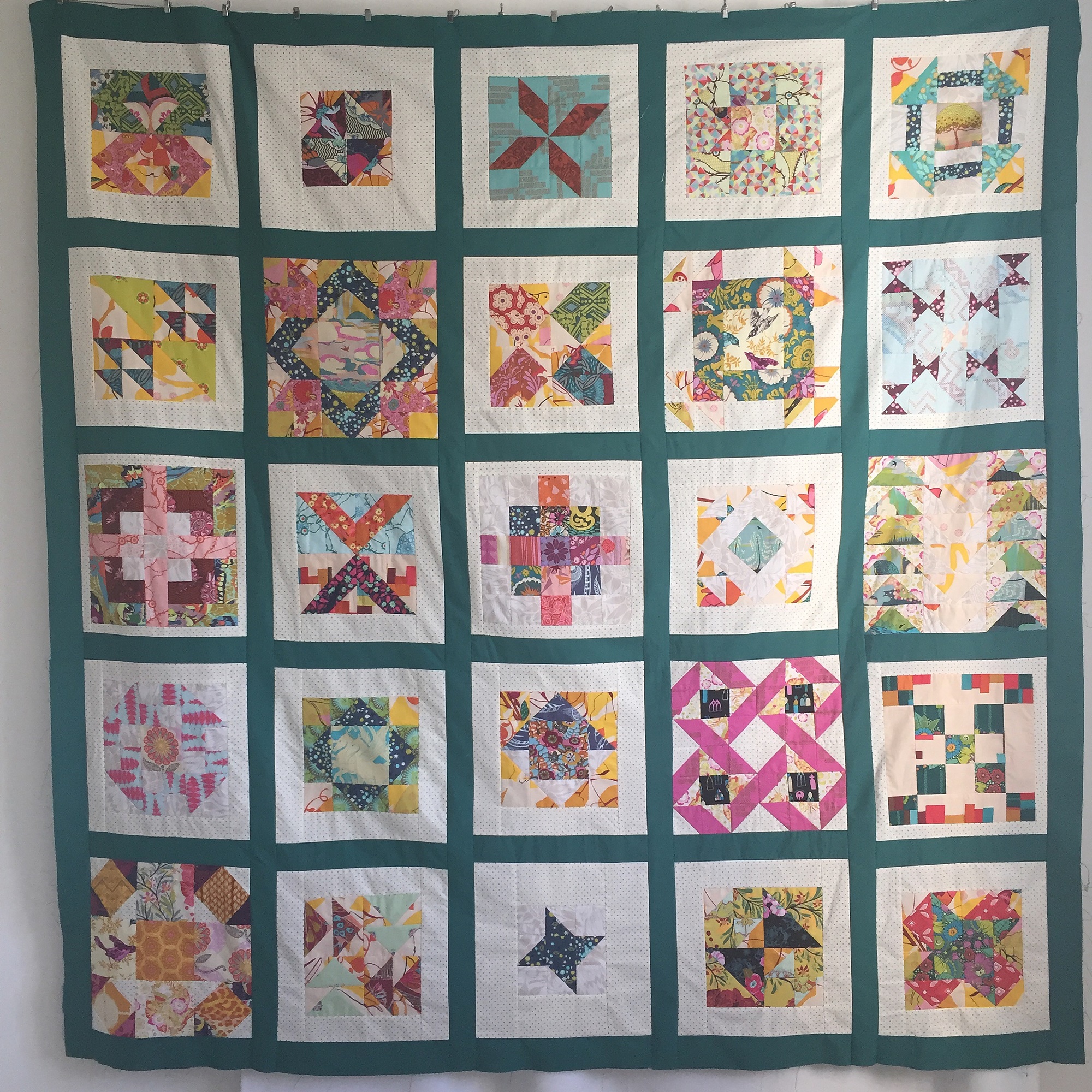 Let’s take a look at an international version of the SBS. I watched this quilt grow on Instagram.  Mariana (@cosertejercrear on Instagram) is a quilter who lives in a town just north of Valencia, in Spain.  She began quilting six years ago.  Because there are no quilt shops or guilds in her part of the world, Mariana has made friends with lots of quilters over the internet. She orders her fabric on-line and says most of her quilty friends are American.  Participating in a QAL that has such a strong presence on-line makes the world feel much smaller as we are always communicating with quilters from every corner of the world. Looking at Mariana’s quilt, she used really bright colors and lots of prints.  This could be overwhelming but it isn’t — she used white frames on the blocks and a calm, blue sashing to set the blocks. It ties everything together neatly. 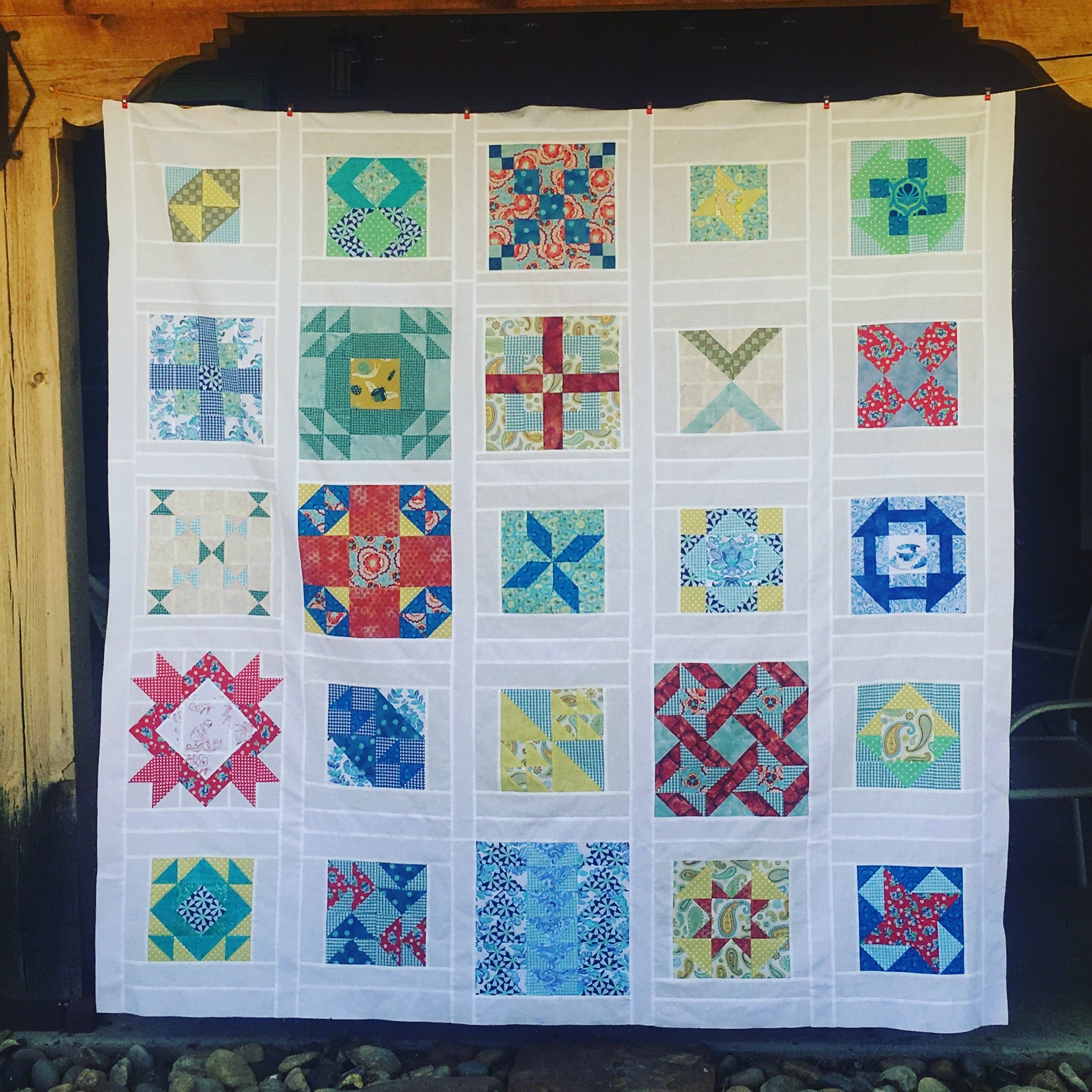 This one will surprise you.  Lisa made the SBS quilt as her first quilt project ever. I know…. that is crazy, right?? When I saw her posts on Instagram (@knitluxe) and realized she was a newbie quilter, I wanted to know more. She has been a crafter for a long while who has done a lot of knitting and has made clothing but this quilt is her first attempt at quilting.  She lives in New Mexico and clearly has a talent for sewing!  Like Sharon, Lisa framed her blocks in white and also sashed them with white.  Again, the blocks are floating.  The crisp blue tones look great with the white setting. Kudos to Lisa for taking on something like this as her first project! 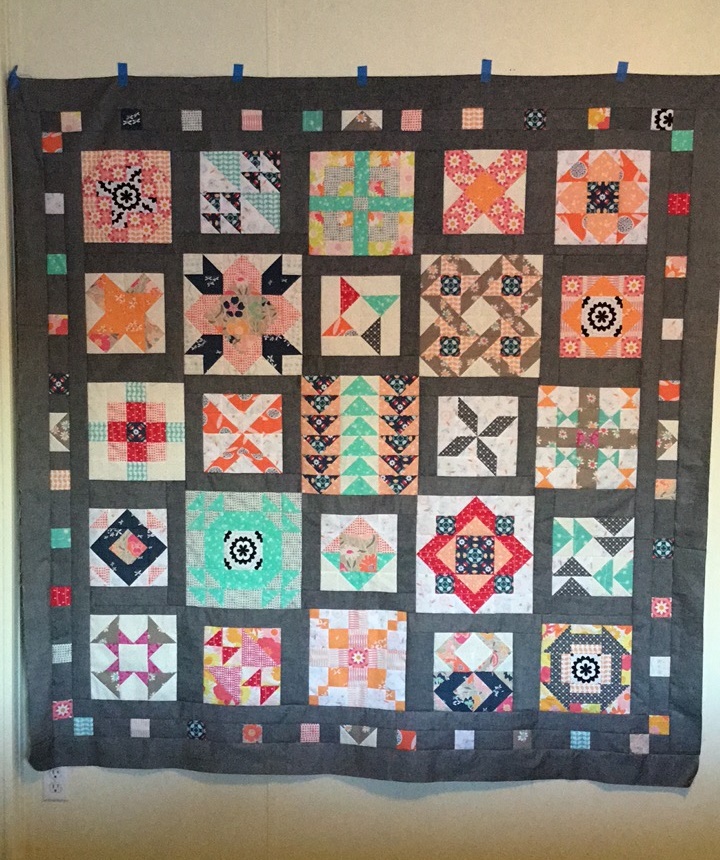 Last but not least is my friend Sarah’s quilt. Sarah of Cedar Fork Stitches lives in cold, cold Montana in a really rural area.  I think she told me she is 40 minutes from town.  Kind of remote, I’d say!  She and I have been friends on Instagram for a while now.  (She is @cedarforksarah)  I love Sarah’s quilt for the personal twist she put on it.  She chose to skip the frames on the blocks, added a few of her own blocks and put a great border on the quilt.  The chambray she used for the sashing and borders is really rich and sets her blocks off well.

Clearly this post could go on and on because there are hundreds more quilts to see.  If you want to take a look, hop over to Instagram and search on #sewcialbeesampler. As I write this, there are 7,280 photos in the hashtag.  Really amazing and far more than I think Maureen or Sharon anticipated!!

I am looking around at the quilt alongs and block of the month events that are starting to line up for 2018.  I’ll be back with a round up of some fun events in a few weeks.  If you know of a good one, leave it in the comments and I will check it out.  I am definitely going to do at least one.  Just need to decide which one!

16 thoughts on “Sewcial Bee Sampler Round Up”